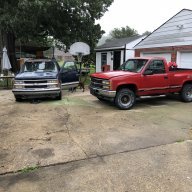 Ok guys, here goes. A couple of years ago I bought a red 1995 K1500 Z71 single cab stepside as a father/son restoration project. It's a tribute truck to my son's grandfather on his mom's side. When he was little his grandpa used to let him sit in his lap and drive his green 1995 C1500 single cab stepside. He passed away several years ago. And my son got into wrenching and cars of all kinds. So I told him that we could do a father/son build as his first vehicle. So he started searching all over locally and was sending me pictures of Stingray Corvettes and Chevelles (anyone seeing the Chevy trend here?) and things like that. I told him that he'd lost his mind if he thought I was going to give him a muscle car as his first vehicle! My first car was a VW Bug and I still thought that I was Speed Racer!! lol So I can only imagine how that would have ended if I had more than 50ish HP!!

So we got the K1500 instead when I found it on FB Marketplace for the really good price of $700. Of course, it was $700 because the 5.0 TBI engine was blown. That was fine with me because building an engine was part of the fun of the project in my opinion. So I personally prefer the look of the '94 and later front ends, but also the interior design of the '95 and later trucks. The drawback for me, was that the Vortec didn't come around until '96 and later. And for now I was wanting L31 Vortec power with factory fuel injection and the benefits of OBD-II. And by the time you upgrade the L31 fuel injection to anything other than a carburetor, you could have bought 3-4 LS 5.3's. So maybe in the future, for what we're calling stage 2, the LS engine will come, along with a full, true SS conversion, where we drop the truck, but for now an L31 Vortec slightly built up will have to do. You have to remember that a 16yo kid will be driving this, so there's no reason to go too crazy and give him enough power to kill himself or total the truck.

So I got the '95 stepside because it's exactly what his grandfather had, only that one was bare bones with a 5.0 TBI engine and a 5 speed and lowest trim possibly available. And his is the 4x4 with the highest possible trim package and a mildly built Vortec engine.

I bought the truck about 2 year ago, give or take, and we've done very little and it's been on the back burner mostly. But now I'm retired from the Navy after 22 years doing that, and I'm a civilian contractor still supporting submarine communications and networking stuff, only I don't actually have to go out to sea for months of my life anymore to do it!

So I'm finally getting off of my dead ass and getting hot and heavy into this thing as quickly as my time and budget will allow.

So where was I going to source a complete L31 Vortec engine? Also, as much as I loved the 80's and 90's, WTF were they thinking by ever making a red truck with a maroon red interior?!?! So I'm changing and customizing the interior color to a darker gray. Anyway, I got 2 birds with 1 stone of getting a drive train, wiring harness, some interior parts since obviously they aren't the same, by finding this $400 1996 Tahoe donor! The engine ran as well as you could possible expect it to with over 200k miles on it and rats nets everywhere!! Lol Yes, it's a 2 bolt main 350, but again, I'll be happy with close to 300 HP, so it's more than strong enough for that with 2 bolt mains and a factory crank and rods.

So I bought these wheels, and these tires, and had that dude powder coat and mount and balance them. They came out amazing in my opinion, but they're pretty dirty at the moment from just sitting.

So I bought these wheels, and these tires, and had that dude powder coat and mount and balance them. They came out amazing in my opinion, but they're pretty dirty at the moment from just sitting.

This is how she sits and looks today.

The engine is currently at the machine shop getting a stupid amount of $$'s worth of work done. I know, should've gone LS. Cheaper and easier and more power. I get it. So let's move past that and just enjoy the project!! Lol

I decided to finally use my ultra sonic parts washer to clean up the pistons and rods before I took them to the machine shop since I'm reusing the old rods. So he was going to have to remove the old pistons for me and install the new ones. I know that we've all seen these kinds of pictures before, but the before and after on these things is amazing!

These pics are from a couple of weeks ago when we loaded up the block and heads to take to the machine shop. I, stupidly, actually forgot to take the pistons/rods that day!! Rookie mistake, I know.

clgodwin79 said:
This is how she sits and looks today.

I decided to do a 4" lift vice 6" as well as 33's vice 35's based on that. I know that the price is the same. But I want this truck to drive better on road than off since 95% of it's time that's where it'll be. Yes, I'm building more of a mall crawler that will be very capable off road, just not routinely getting taken off road.
You must log in or register to reply here.
Share:
Facebook Twitter Reddit Pinterest Tumblr WhatsApp Email Share Link