Aem72717 said:
now you got to have the steel cap over the idle screw out of the TBI easiest way for me is with it removed from the motor use a hack saw or a Dremel or whatever you have to cut an 1/8th inch or so top and bottom of the cap and knock the cap out with a chisel now you can access the torx head screw that sets your idle and set the idle to the recommended setting from the label under the hood
Click to expand...

There's a reason there's a cap over the idle adjustment. Turning your idle up is a crutch to hide the real problem. Once you find what's wrong and fix it, your idle will be jacked up.
A

If you knew what a scan tool does, you'd never recommend trying to piecemeal sensor diagnostics with a multimeter.

What takes fifteen minutes with a scan tool, takes all damn day with a multimeter, and doesn't provide results as accurate.
E

Does not always play well with others

Aem72717 said:
I am fully aware of what a scan tool does and I was simply trying to help the guy out with the procedure to set idle you going to tell me that after a cam change or a new motor that the TBI does not need to have it's base idle adjusted ever and other than giving some advice I agreed with all that was said I even told him so at the start of my post that's fine that you know all sir glad that you do sorry that I even said a thing have a wonderful day
Click to expand...

Reread your post before you fly off the handle at someone. 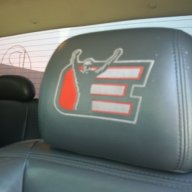 evilunclegrimace said:
Reread your post before you fly off the handle at someone.

It's always the new guys. Well, almost always. I had to look and see if it was new guy from yesterday that got mad in a different post.. nope, different new guy.

New guy, welcome, and take it easy. Lots of great people and help here if you don't just stomp in and start pissing in all the corners.

While you can diagnose with a DVOM instead of a scan tool, it's like trying to rebuild your engine with it still in the truck. If you're flat broke and can't afford the tool, do what you gotta do. If you can afford a good scan tool, pay the money to play an easier game.
S

Hi everyone I got it started and driving. Me and my friend adjusted the timing IAC valve and idle screw. I will make a new thread describing my new issues with it on the road
You must log in or register to reply here.