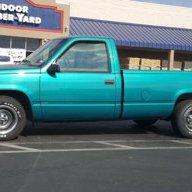 That's going to look great when it's done.

Moparmat2000 said:
That's going to look great when it's done.
Click to expand...

Thanks! It’s been torn apart so long and I had been so busy traveling it was starting to drive me nuts. Really enjoying the process now that we ve had a bit of home time. 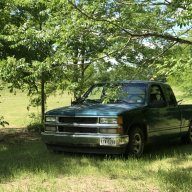 Having custom 3” exhaust is so much $$$ and you’re stuck with having the pinched bends, and I'm especially picky about how it looks. Once they’re done you’re stuck with a bill and however good they felt like doing that day. Area I grew up in for some reason has many really talented exhaust guys and header manufacturers, Schoenfeld being one and they were a family friend.

The lack of options for 88-98 trucks in 3” led me to stumbling across Speed Engineering stuff that a guy used on his OBS but it’s all designed for 99-2013 trucks. I posted the links to the exhaust section. So here’s what I’ve come up with so far.

This is the Speed Engineering 3” stainless tailpipes-WITHOUT their mufflers for ‘99-2013 GM RCSB that I watched on their scratch n dent sale list that were missing mufflers they couldn’t sell as “new”. PN 25-1008 New with mufflers it’s $325.00 once they were marked down to $179 I jumped on them. I must say the quality of this stuff is very nice! My buddy dropped $3,600.00 for Stainless Works system headers all the way to tailpipe tips for his RCSB 2015 getting a turbo or supercharged 1,000 HP engine swap. It’s nice but definitely not worth my $3,600.

I’m adding a crossmember anyway just ahead of axle right where they need a hanger dropped down so it will be easy to mount. The rod could be heated and pointed towards frame but the added crossmember idea solves that. Dynomax mufflers I got as a deal a friend worked at Tenneco (owns Dynomax) Ultraflow 409 3” stainless offset in/out. Modified the OE hanger at back of cab and the dual “clamps” at front of mufflers have a stud that now slips into OE rubber and will modify hanger at tailpipe exit. All fits like it’s made for this ‘88 and mufflers tuck up real nice. Will shorten the tip sections to keep ‘em tucked tight to tire in stock exit location. They have nice looking 4” tips.

Headers collectors back will be their LS setup when funds allow. Will be tig welded with V-bands on part that crosses over. I posted YouTube videos in exhaust section of the setup a guy did, also where I found cool trans cross member that keeps it all above frame and away from floors.

I only have this one picture when I initially mocked it up to get an idea if my mental engineering and measuring idea would work and I’m pleasantly surprised that it fits just like I wanted it to. My daily is a 2013 GMC so I had an idea about where the mounting points were different and what it would take to make it work. I will get it all laid out this week to show how it goes together, and how I modded the factory hangers on the ‘88.

Here’s the link to what I bought without there mufflers 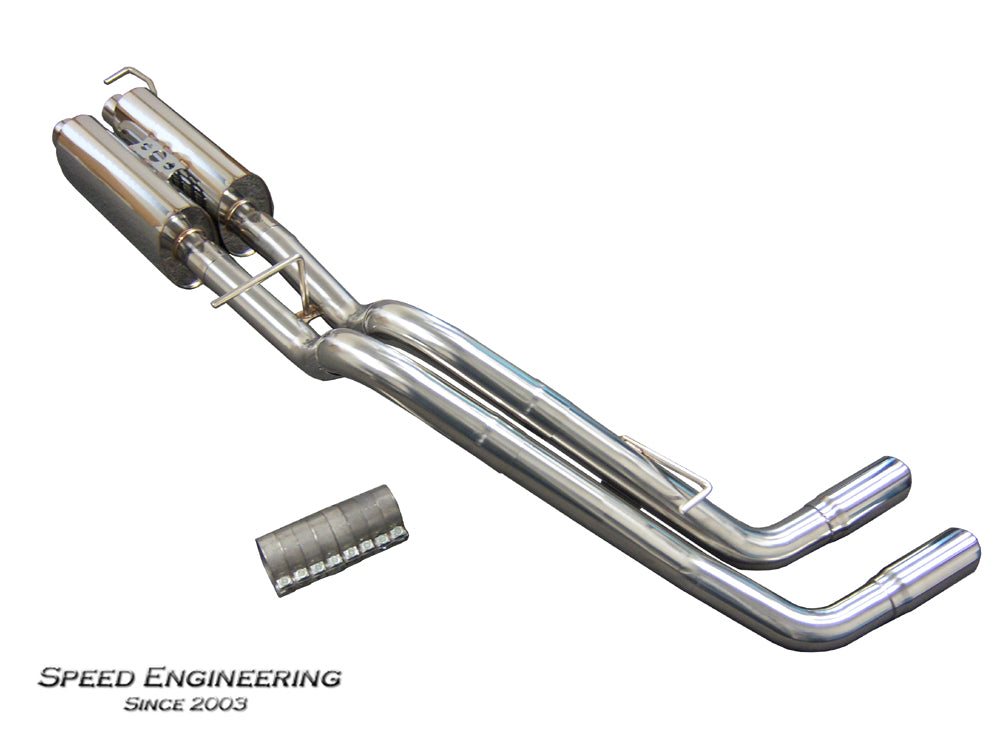 Some more pics and info on the Speed Engineering exhaust system that’s actually for ‘99-2013 trucks. Figured I would document some measurements for anyone that wants to use this on their truck.

I still have to fab 3 frame brackets to hang it from. Not too difficult, I think for the front at back of cab I will snag a fuel tank front bracket from the treasure yard that’s 1/2 mile from the house. Think I can cut it down and invert it, then put a rubber centered hanger just like the stock one at back of cab. Center will take a lil cutting and welding and tie it into the crossmember and frame/shock bracket. Or I may shorten the original transmission mount, invert it because they have a relief that looks to clear the top of the gas tank an gain a little more rigidity in the frame just ahead of the axle. E-brake cable will need some minor re-routing but think I got that figured out.

Dynomax mufflers part number in pictures. They are 14” long at the body then the inlets/outlets are all 2 1/2” long and 3” diameter.

The tailpipe section will need to be shortened about 4 inches easy enough in the chop saw to keep them tucked up to the bed and tire. The 4” tips look very nice with a slightly swept look. Quality of all the stainless is very nice and I have a buddy with skills and tig welder so I won’t be clamping anything except the tailpipe section just for ease of removal. The mufflers will be level with bottom of fuel tank so not a drag hazard or looking lazy hanging down from the side. I hope lol.

Not sure if these would work on a 5/7 or 4/6 drop. I am at 3/5 drop and are above bottom of frame rail, I don’t have a C-notch in it but May if I eventually go to Calvert Racing 1” drop split monoleafs later if I can’t get good weight transfer with shock tuning, but that may require adjustable rears to match the front coilover setup.

Once I set the engine in it I’ll order the Speed Engineering stainless header flange-back part with crossover from drivers side and their X pipe. It’s only 36 inches from front of mufflers to trans crossmember so cost shouldn’t be terrible, I’ll keep watching the scratch-n-dent section for pieces.

Another picture of how exhaust lines up from front to rear, I’m using a transmission crossmember that keeps 3” exhaust with long tube headers tucked level with bottom of frame but still not super close to floor pans. May need to use a couple of the tubes they sell that have a gentle curve in them to dip up about 2 1/2 inches where it will meet mufflers. That keeps the pipes level and not below gas tank level or frame.

alignman88 said:
I still have to fab 3 frame brackets to hang it from. Not too difficult, I think for the front at back of cab I will snag a fuel tank front bracket from the treasure yard that’s 1/2 mile from the house. Think I can cut it down and invert it, then put a rubber centered hanger just like the stock one at back of cab. Center will take a lil cutting and welding and tie it into the crossmember and frame/shock bracket. Or I may shorten the original transmission mount, invert it because they have a relief that looks to clear the top of the gas tank an gain a little more rigidity in the frame just ahead of the axle. E-brake cable will need some minor re-routing but think I got that figured out.
Click to expand...

The 94-up trucks use those rod type exhaust hangars. You might be able to find something at the yard that would just bolt on.

I was online this last weekend looking for some Steve Stanford renderings of OBS trucks so I could have a friend who’s a photoshop wizard put the paint scheme I decided on before starting this build. What did I find but the exact scheme I had in my head! One of my favorites, Hot Rods By Boyd. Can’t believe I hadn’t seen this one before, it was a 2013 build, guess I wasn’t thinking about it back then. Boyd’s was one of the first places that launched the sport truck movement when these OBS trucks first came out. Always liked their stuff, especially when Chip Foose was getting his start there.

In 1995 I had the first set of their Smoothie wheels made for the new re-designed Dodge trucks. I only know this because I spoke to them (Boyd’s first wife) to double check some dimensions and she was updating delivery time because they were moving to a new wheel manufacturing building. So here is how my OBS will be painted in original silver/metallic black colors, as well as my ‘95 Dodge with Boyd’s, Belltech 2/4, Mopar Performance ECM, headers and camshaft upgrades that were all done the first week I had possession of it. I know, a Dodge? Worked for a multi-store Dodge dealer and he got bent that I was going to by a 454SS trade in so let’s just say I got a good deal LOL. Still wish I had bought the 454SS. 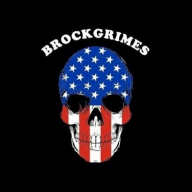 alignman88 said:
I’ve heard of the Jeep part swap and also heard some shops won’t perform alignments on them due to a “possibility” it can get jammed or hung up somehow causing a safety concern so they don’t want the liability? Maybe I read it somewhere here, need to look into it further myself though. $15 is definitely better than the $175 from Borgeson, thanks for bringing it up!
Click to expand...

I have an '88 with the jeep shaft no issues getting it aligned, etc.
You must log in or register to reply here.

Opinions wanted on my street build
2

B
Thanks gmt400 for all your help! Build thread to come
2