Truck dies when put in gear. 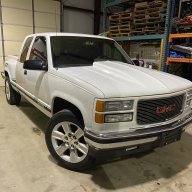 Hey all, I’ve got a bit of an issue. I’ve got a 1994 GMC K1500 with the TBI 350 and the 4L60E. The truck starts and runs just fine, but the second it’s put into reverse or drive it dies. Now, if I disconnect the trans fuse it’s goes into gear just fine, but the throttle is a little funky. It surges and isn’t linear when you keep the throttle at one place. It jumps up and down like I’m slamming the throttle then letting off over and over. I’m betting on a throttle position sensor due to the odd throttle, but why would it stall only when the fuse is connected, could it be a TCC lockup solenoid? The trans was rebuilt 3k miles ago.

Edit: I replaced the TPS and cleared the codes, it didn't fix anything and now it just throws code 67, which according to the FSM is a TCC solenoid fault. The FSM also shows how to diagnose the TCC, but it requires a Tech 1, which I don't have and don't really want to spend $500 on right now. Is there any other way to test the TCC or should I just replace it and see if that fixes my issue? I hate throwing parts at an issue, but I'm a bit strapped on time right now and I'm not in a position to buy a Tech 1.
Last edited: Jun 19, 2022

Maybe it's a failed torque converter. That would cost more, and be much harder to replace.

I'd drop the pan, remove the TCC solenoid, and see what it looks like. Maybe just replace the thing.
You must log in or register to reply here.

No TCC lockup in high gear when warm