The rear seat in my CCLB has the fold down armrest and I thought it might be useful to swap out to a console lid style. Did GM offer the console style seat in red? Pics of my rear seat and what I’m looking for are attached. I’m not finding anything in red. Not that I’m a huge fan of the red interior, but not willing to undertake a complete color swap either.

I may have found what I’m looking for. Can anyone confirm this will bolt up in place of my current plain armrest? 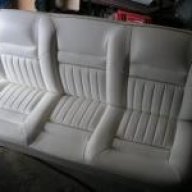 It certainly looks like that would work.
GM, being GM, was pretty consistent at cross-referencing basic generic parts between various options/models/divisions.
The two versions of that console are more than likely based on the same stamped pan.
Check length, height & width. Just to be sure. That stamped pan may have provisions for an optional pivot point, too.
I didn't even know that there was a variation for that seat's console.

He wants how much for that??? eeYikes!
I've bought really nice bench seats for that much.
For that kinda cash, it better come with all the bolts, (Console>bracket, bracket>seat) the bracket & the plastic cover.
It's a difference that even a lot of owner's of those seats are aware of. That's both good & bad.
Uncommon part but with a limited market.
Most people buy complete seats.
That being said, how bad do you want it?
I'd figure a console in that condition should be worth around 1/2 of that, maybe go as high as $75.00.
But then, i'm cheap. 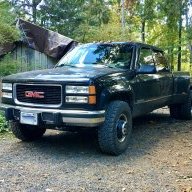 My truck has both. It will work, I think. Pivot points are same width and same distance from seat. The extra inch in height on the new one is all above the pivot point and there is enough room to the rear of the cab so it will still flip up.
B

Thanks gentlemen! I was a bit shocked at the list price as well given what complete seats go for. The few I’ve come across on eBay are about the same price-so I will keep looking...

At least I know it should work if I’m able to find one.
You must log in or register to reply here.