A little side project.... trash can 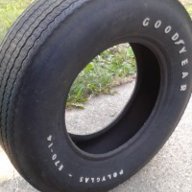 I've been using an old bent up galvanized trash can with holes in it, that was in the garage when I bought it. It's a pain because the lid always sticks, no matter how gently you put it in place..... and when you're trying to hold on to to something (like a dust pan full of too much crap) and not drop it, while taking the lid off, it's irritating.

My uncle, decided to get rid of the oil barrel that's been at the family property for eons..... I think the barrel was originally for canned dinosaur meat, not oil. It's been used for used motor oil for decades.

I brought it home last night, and started cleaning it today....the inside is/was so nasty, I skipped over my traditional water based/alkali degreasers, and went for the big dog, GAS! I haven't used gas to clean in years, but today, I did. I think I'm going to drive it up to the car wash later and power wash it, and scrub it wish dish soap.

I've got a metal handle I'm going to install on the lid, so it's hopefully easy to remove.... with one hand, while holding a dust pan full of crap.

Made some progress on the "new" trash can today. I got the dent out of the lid, decided on what handle to use, and washed it up at the car wash. When I got home I decided to spray it with Phosphoric acid and go over it with some 0000 steel wool. I probably shouldn't have done that last step, as now the original print is super light. I don't think I was taking off much red paint. I think the red was likely mostly faded away and replaced with rust and rust stains. It sat outside for about the last year, but prior to that it had spent years inside a closed up garage that was always very humid.

I'm going to paint the bottom of the can to prevent it from rusting out. I've got some asphalt paint, I'll probably use. That's what I used on the bottom of my grinder base. I might clear the rest of it with satin clear Rustoleum... haven't decided yet.

Here is the can today, and some pictures I found online of what they look like in better shape. You can see one side of one of the internet pictures is super faded.... so that red was not UV stable, it would seem.

I just realized that my barrel is like the inverse of the ones I found online. It looks like the red faded, but protected the barrel better from rust than the white, so my print is white that then rusted, and the white background is red that faded. I can see traces of red, so I know it wasn't just a different paint scheme. 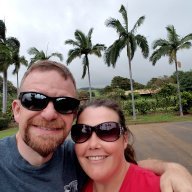 I'm going back and forth on how to proceed. I've thought about clearing, possibly with Waterlox, that I think would give it a bit of an amber cast. I've also considered painting the top and bottom sections red, and clearing the center. I just don't like all the stark white.

I still need to clean up the lid. I found that it has an o-ring seal. It came out fine, but broke when I was wiping it off. I'll try degreasing it, and if it doesn't break any more, may just stick it back in. It's got a 1/4" cross section, so I could easily replace it with some 1/4" OD tubing. It doesn't need to seal, of course, but I still need something there to dampen the sound when closing it up, and to keep the lid from settling on the barrel too far and making it hard to get into.

The handle I'm going to use is actually the handle from my old galvanized can. Apparently, it came off when the previous owner of the house owned it, and he reattached it with screws. I did grind down the remnant of the spot welds that he did not, do. The old can got picked up by the scrappers this week.
You must log in or register to reply here.
Share:
Facebook Twitter Reddit Pinterest Tumblr WhatsApp Email Share Link