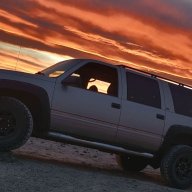 Well, fell short of my goals. I was so sore and tired this morning I didn't really even want to work on the truck. Ended up getting the nut on the exhaust flange off right away with my larger impact. Then started working on the bell housing bolts. The 2 that were left were on the passenger side, there is a bracket/heat shield there which made it super difficult to get. The bottom nut(for the head shield) wasn't too bad, got it fairly quickly with a ratchet set up. The top nut was a different story. The heat shield was in the way for a ratchet set up, and using any type of wrench from the bottom. So I had to go from the top. I was able to get it, but it took forever with 1/8 turns of a ratcheting wrench. After I got the head shield out of the way, I was able to get the bolts out fairly easily.

I disconnected the oil cooler lines from the motor, as well as pulled the motor mount through bolts. I was ready to pull the motor. Or so I thought. I struggled, but was having no luck getting the motor to separate from the trans. After about 1.5 hrs, I was beyond tired. I knew even if I got it out tonight, I was going to have to struggle to get it in the parts truck, as I have nowhere else for it to go, and don't want it just dangling or sitting on the ground. So I decided to call it a night.

After thinking on it. I believe I still have the upper 2 bell housing bolts to remove. A friend was helping me, and he got the 2 nuts off. I didn't think anything of it at the time, but I believe they were just the nuts for the trans dipstick, and fuel line brackets. So when I get back to working on it, I will see if that's the case. I assumed the nut came off, and they would just slide out of the trans, but that was just tired brain not thinking properly.

I felt so defeated coming inside. My plans for the weekend didn't pan out. But mostly I don't get to drive the truck to work tomorrow. It's probably for the better though. I would rather make sure everything is done correctly and not miss something, and either break a component or cause problems that I later have to troubleshoot.

While I was waiting for a friend so help with the hood and motor mount bolts, I did get my 2" spacers installed on the rear wheels. They are still slightly narrower than the front, but it looks so much better. I test fit my hubcaps and they fit perfectly. Now I just have to get them painted and finished up. I'll do a thread about that with pictures when the time comes.

Got the old motor out yesterday. In the process of getting the good motor 100% ready to go in. Should be dropping it in the hole tomorrow morning before work.

It's amazing how easily the motor and trans separated with all the bellhousing bolts removed. Only took me about 5 minutes to have the motor/trans completely separated after getting the bolts out.

Currently working on the exhaust manifolds, and spark plugs. Then I'll get the radiator installed, prime the oil pump. And keep working from there. Finally can see the finish line, only a week late. Probably still won't drive it before Thanksgiving.
You must log in or register to reply here.
Share:
Facebook Twitter Reddit Pinterest Tumblr WhatsApp Email Share Link