Hi everybody,
I’ve got a 94 Suburban we’ve had since 98, it started out as the family hauler when it replaced the garbage 94 Caravan my parents bought new.

In the years since, it’s been to several colleges and is used a occasionally as the workhorse is was made to be, either for the 4wd or hauling a trailer now and again.

It’s been through several bouts of sitting for a couple of years at a time, as it just wasn’t needed- but I was able to persuade my folks to hang on to it for the times it comes in handy- and it’s been a 100% worth it every time.

It always fires right up with a charged battery, and I very much like having it around.

So today is one of those times. Hasn’t been driven regularly in about 3 years- again.

At it’s last extraction from storage at that time, it was discovered that the brake lights weren’t working.

Needed it pronto and didn’t know the problem would be simple- so it went to the dealer and came back with a new brake light switch.

Fast forward to now- it’s had maybe 2000 miles of use since then- same problem. Thought it was odd it would fail again with so little use, but now that I know it’s a relatively simple job, I ordered another switch for $16 and put it on.

Have been trying to track down other possible causes, and I think the most likely candidate is the brake light relay.

The problem is- I can’t find it.

Have found several diagrams and photos, that claim to be 94’s, but are showing a different thing than what I am looking at.

What I’m finding are photos of a little grey box, mounted right on the firewall, almost directly in front of the driver, just to the side of the master cylinder.

No such relay mounted and no eveidence there was ever anything in that location.

I’m thinking maybe this was a mid-year change in manufacturing process?

I can’t find anything conclusive.

I’m hoping someone smarter than me is reading this and can help point me in the direction of where else to look.

It does NOT have what is pictured below. 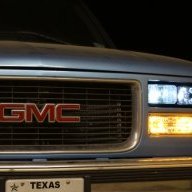 Much better chance of your ground on the left rear frame rail being loose. The Suburbans didn't have brake light relays, only the pickups have them (and even then, not all of them). Another possibility is the blinker switch in the steering column. The brake switch output runs into the steering column before going to the lights, broken wires in the column are very common at this age. One more thing: Stop/Haz fuse is good?
You must log in or register to reply here.
Share:
Facebook Twitter Reddit Pinterest Tumblr WhatsApp Email Share Link